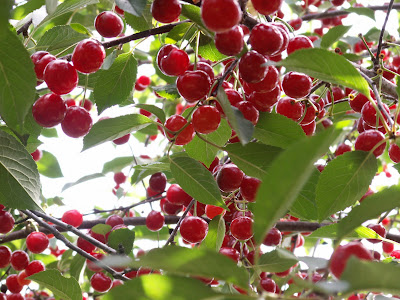 Picking cherries is one of Julie's highlights for the summer. She convinced me to join her on the three hour trip to Hide-Away Orchard, south of Adrian, Michigan. With a picnic lunch and our cousin Christie we were set for a wonderful morning. Julie and I picked thirty pounds of cherries--four gallon Ziploc bags. 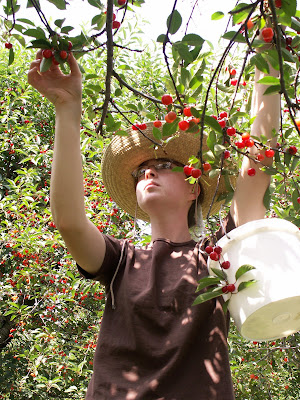 The orchard opened for pickers on Tuesday. Thursday morning the trees were still loaded with tart, red cherries, though the orchard wasn't as crowded as the first two days. On the opening day, some customers waited an hour to have their cherries pitted! 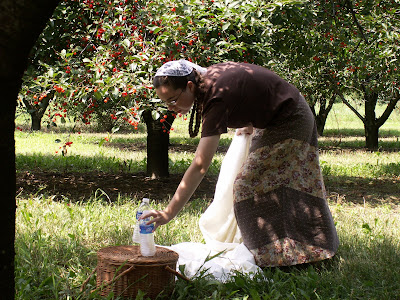 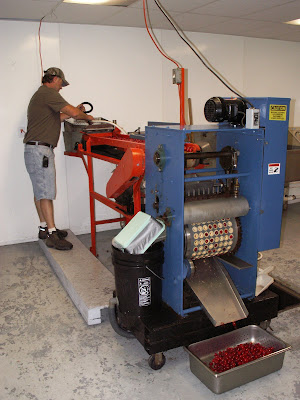 I was fascinated by the cherry pitting machine. According to the owner, the 17-year-old machine can pit 400 pounds of cherries an hour. The cherries are dumped at the far end of the machine, where they are rinsed with water. Then they are spread on a conveyer belt, the orange part, which transports them to the pitting mechanism, the blue part. Each cherry is dropped into an individual plastic cup on a rotating cylinder. This machine has eight plastic cups per row. Bigger machines have up to twenty-four cups. Years ago, the cups were made of metal. The plastic cups don't smash the cherries as much and can be changed according to the size of the cherry. Thin metal rods punch the pits out of the cherries and the cylinder continues rotating, depositing the cherries on the chute which slides them into the waiting container.
Side-note: I grabbed a piece of paper from my purse to scribble notes about the cherry pitter and accidently wrote on the backside of an un-cashed check. Oops! I hope the credit union doesn't mind too much.
Posted by Amy at 10:03 AM