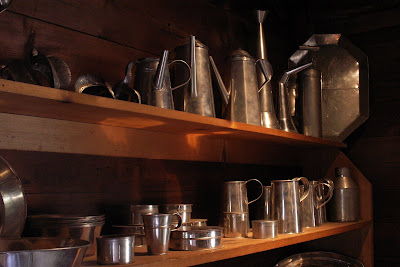 After picking cherries Julie, Christie and I drove forty-five minutes to Sauder Village in Archbold, Ohio (the town famous in our family for Yoder and Frey Auction—a place of wonderful memories of tractors, auctioneers and waterlogged boots). Sauder Village was established by Erie Sauder who envisioned a village where visitors could observe the olden days. Guides, dressed in period clothing, explained the significance of each component of the village—from the schoolhouse to depot to the church to the cooper’s shop. 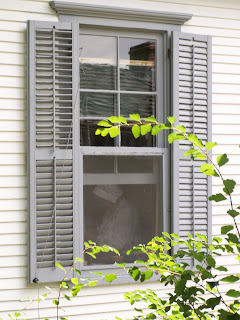 My two favorite stops were the W.O. Taylor Printing Office and the Broom Shop (motto: A house without a broom is like a bride without a groom). In the print shop our guide, a bent old man who shuffled with a three-wheeled walker, pointed out a printing press similar to the one Benjamin Franklin used. Our guide worked at various jobs at the Toledo Blade for twenty-some years before retiring. Upon my inquiry, he explained how photo negatives were turned into etchings and smeared with ink to make illustrations in the newspaper. He also showed us a machine similar to what he used when he worked at the Blade. It converted the coded tape (which looked like fly paper with dots) into the metal type used to print national news stories. 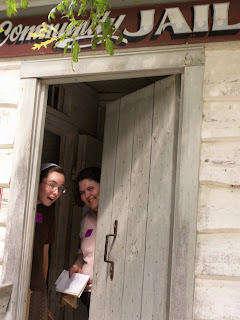 After touring the Broom Shop, Christie declared her next hobby as broom making. The bristles of a broom are made from broomcorn—a plant that looks similar to sorghum. Broomcorn is wrapped around the broom handle and secured with wire to make a circular broom. The bristles are pressed into a fan shape and then sewn together. In the final step the bristles are trimmed. 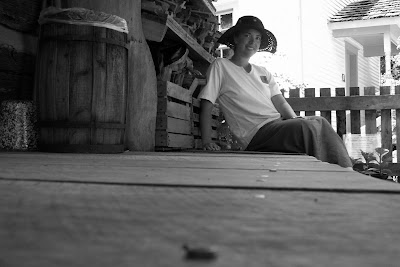 The pungency of the herb shop caused my nose to run. I shot self-portraits on the porch while Christie and Julie selected Peach Ambrosia Roobos Tea for Aunt Sandy. 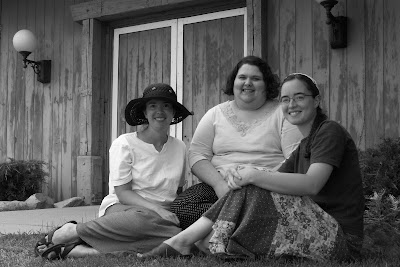 We didn’t make it through the whole village before closing time at five o’clock. We walked across the parking lot to the Barn Restaurant. There the rooms were named “Manger,” “Feedlot,” “Loft,” and “Granary,” and the chandeliers were made of wagon wheels. I eyed the packets of butter and half-and-half while we waited for our meals. After we warded off starvation, we posed for a group portrait (left to right: Amy, Christie, Julie). Tip: If you don’t have a tri-pod, improvise with your aunt’s three-gallon stockpot.