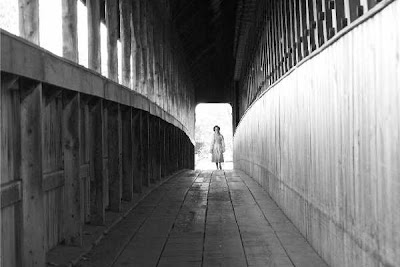 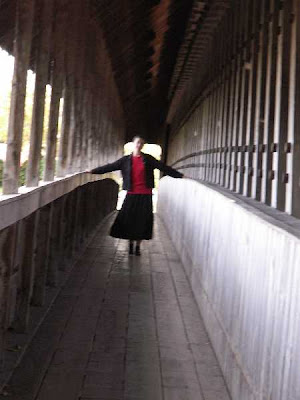 Naomi and I amused ourselves on the covered bridge over the Cass River Friday afternoon while the rest of our party waited for chicken dinner to-go from the Castle shops beneath the Bavarian Inn in Frankenmuth. Earlier in the afternoon we dropped seventeen pounds of wool from Betsy's sheep Lou at the Woolen Mill to be cleaned and processed into quilt batting.
When Naomi and I switched camera places and I became the model I was pleased to see her composing the photo by trying different camera angles. Her shots were a little blurry, probably because of a slow shutter speed, but that just adds to the atmosphere of the picture. She can learn about aperture and shutter speed later--it's more important that she learn to see a photograph before it is taken.
Posted by Amy at 11:30 AM