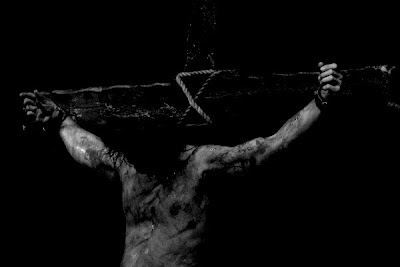 At the time it wasn't funny.
But now it is ironically amusing.
It happened in eighth grade math class as we reviewed probability in preparation for the quiz the next day. I have a student that I try to imagine as a missionary to cannibals in Africa. Maybe he can impress them with his belching ability and thus avoid the soup pot. Maybe he can distract a tribe of vicious Papua New Guinea headhunters with the clown-walk that he so carefully practiced in math class or maybe he can teach the children in a Colombian village how to fold paper airplanes. In my less charitable moments I just wish the principal would just hurry up and suspend him again.
As we reviewed the difference between experimental and theoretical probability he was his usual rude, distracting self. This time he had added a new line to his repertoire, and I have to give him credit for creativity and timing.
He'd obviously been to church recently for a Lenten service and retained at least part of the liturgy. I sent him to sit in the hall after his usual barrage of distracting comments. As I escorted him from the room he announced to the rest of the class, "The love of Christ compels me."
Posted by Amy at 6:13 AM