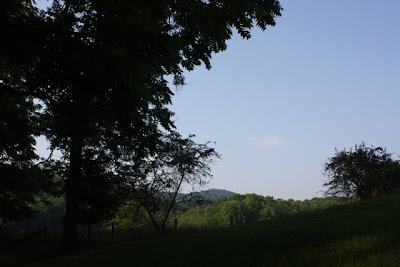 Moravian Falls, Amanda's Aunt Rachel told us, was once settled by Moravians, who deeded the land to Jesus Christ and kept a twenty-four hour prayer vigil on a mountain. But a man challenged the the claim and the King of England awarded the property to that man. Thus the religious group was ousted from their settlement in North Carolina, but their name remained as a reminder of the simple people who once prayed over the rolling hills and rocky streams. 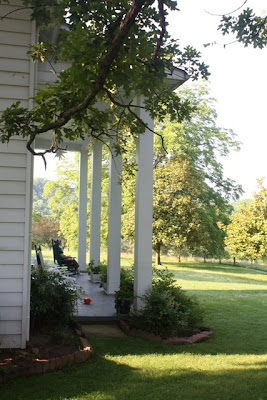 Amanda's aunt, uncle and three cousins live in a huge, old house surrounded by trees, meadow and rolling countryside. The original four room house was constructed in 1890 and has since experienced two additions that added many rooms and passageways. Amanda and I stayed in one of the original bedrooms that has its own fireplace.

Yesterday afternoon we explored the waterfall that can be reached by meandering through a couple of meadows and a "tunnel" through the shadowy woods. Near the stream the air was cooler and less humid and the water was cool and refreshing. Amanda and I, together with her cousins, ages three and five, sloshed through the water, balancing as we moved from rock to rock as we explored the sandy stream bed. We discovered slugs, crayfish, dragonflies, leeches and ticks. Actually, Amanda and I discovered the ticks after we returned to the house.
Posted by Amy at 7:48 AM