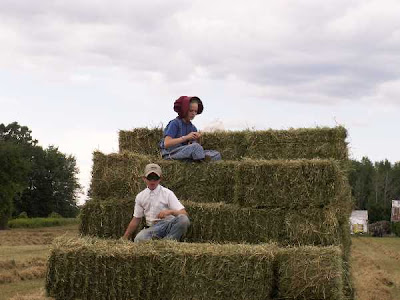 I joined the hay crew for about an hour on Saturday afternoon as tractor driver. Aaron, Betsy and Brian went on a weekend camping trip on the west side of the state, leaving Logan and Dad to bale the three wagonloads of hay in the backfield. I was too preoccupied with using the clutch and PTO lever while keeping an eye on the RPM, where I was going, the baler, and the folks on the wagon, to take many pictures. You'll have to just imagine me driving the tractor since I didn't attempt self-portraits. 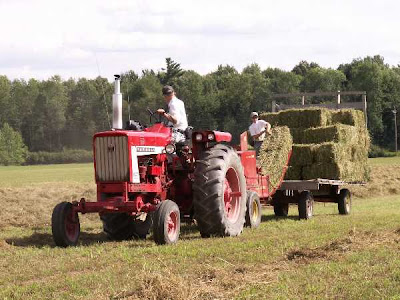 Logan and Dad started and finished baling the back hay field by themselves. Dad drove slowly and stopped every little bit to help Logan stack the hay. Logan was so tired on Sunday that he fell asleep in the van on the way home from church. 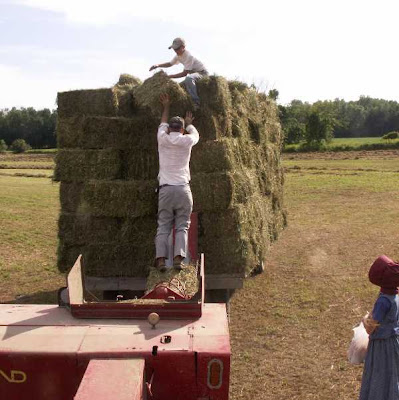 Logan and Dad hoist the last bale on a load of hay. Naomi rode along on the wagon since she didn't want to stay at the house by herself. 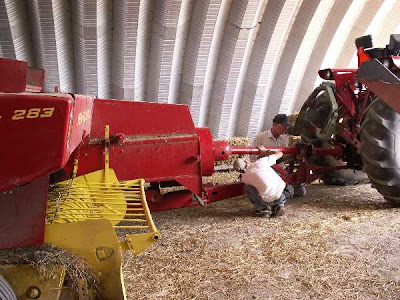 I mixed up a blackberry sour cream coffee cake while Logan and Dad greased fittings on the baler before heading to the back field on Saturday afternoon.
Posted by Amy at 8:11 AM