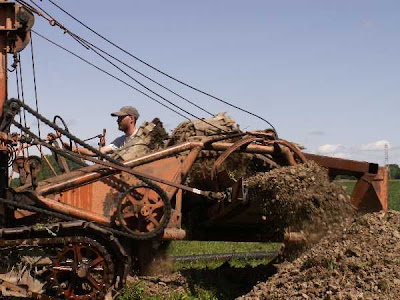 Tiling is one of the dirties jobs on our farm. It can also be one of the most frustrating due to frequent break-downs.
To men accustomed to digging trenches with pick and shovel, the tiling machine must have seemed a marvelous invention. Our 1948 Buckeye Tiling Machine was designed to dig the trenches required to install clay drainage tile in fields. It's an odd contraption, more often broken than not. It emits a growl worthy of its age.
In our field across the road the big boys played in the dirt today. Four years ago my Dad and brothers installed the main tile that runs under the road to the county drain. They hope to complete the job by installing a grid of four inch, black plastic drainage tile throughout the field.
This afternoon they made four 600-foot runs across the front of the field. The tiling machine digs a two-foot wide trench of gradually increasing depth. The fall across the field causes the water to flow through the tile to the ditch. One end of today's run had a depth of four-and-a-half feet; the other end had a depth of a mere three feet.
Before it became a state, Michigan was a mosquito infested swamp. Surveyors divided the land into townships. Loggers cleared trees and farmers moved in determined to drain the mushy ground. Our neighbor remembers when his father had the original clay tile installed on our farm. A group of prisoners with shovels dug trenches across the field.
A good drainage system is necessary in Michigan. When we drive past fields my Dad and brothers can spot the tile lines. The corn or beans growing directly over the tile are bigger and healthier than the plants in the rest of the field. Without drainage, fields flood in the spring and crops often drown. If the plants do survive, they don't send their roots deep enough in the soil. In the summer, when the days are dry and hot, the plants shrivel because their roots don't reach the moisture.
Today there are bigger, more sophisticated machines than our old tiling machine. My Dad bought the antique machine shortly after we acquired the rest of our sixty-acre farm twelve years ago. He knew the fields would yield better with more tile and figured that he and the boys would be able to install it themselves.


Since then he and the boys have installed tile in our own fields, as well as other small fields including two or three fields that we rent. The source of much frustration, because of its frequent break-downs, the tiling machine has been a lawn ornament in several fields. Then it serves as a conversation starter.

The tiling machine in action. An unusual sight. Dad and the boys installed 2,300 feet of tile today. 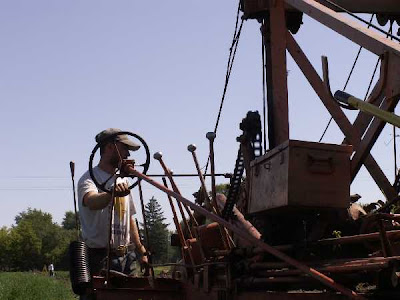 Though the tiling machine has an operator's platform, Aaron prefers to walk beside the machine as he steers and adjusts settings. The machine moves across the field on its tracks at a walking speed. 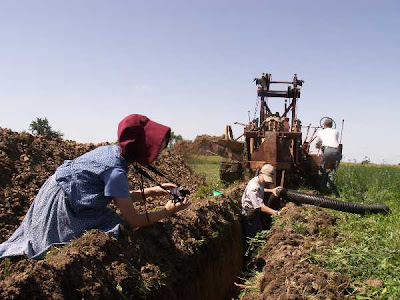 Naomi captures a picture of Aaron operating the tiling machine while Logan, riding on the back, feeds four-inch tile in the hole. At one end the trench was four-and-a-half feet deep. 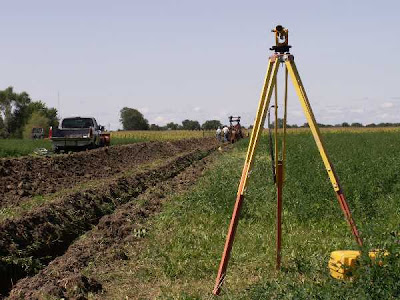 The boys use a transit to shoot the grade of the field before they install tile. The tile slopes across the field so that the water naturally flows through the tile to the ditch. 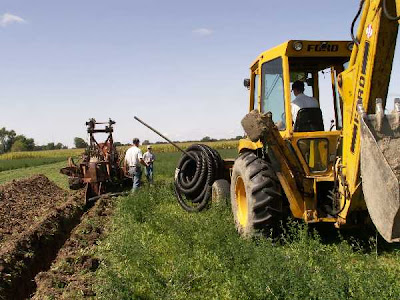 Brian uses our neighbor's back-hoe to deliver a roll of tile in the alfalfa field across the road from our house. The field will be planted to oats or wheat this fall. Alfalfa plants are auto-toxic, which means a field must rest between plantings of alfalfa. The boys hope to bale another cutting of hay from the field yet this fall, but since the weather hasn't been conducive for hay making they decided to begin the tiling.
Posted by Amy at 2:18 PM